Recently, I broke two of my sensors (an expensive mistake involving USB-PD that also broke two of my voltage regulators): the MH-Z19B CO2 sensor and the PMS5003T combined particulate matter (fine dust) and temperature and humidity sensor. Of course, I took the opportunity to dismantle them and see what’s inside.

This is a CO2 sensor that uses infrared light absorption to detect the concentration of CO2 in the atmosphere. It is fairly precise and is the sensor built into the Temtop P1000 air quality meter. It consumes around 130mA at peak, which is once every 6 seconds for about half a second when it performs a measurement.

It has a reflective chamber in the top part of the sensor in which a far infra red (i.e. heat, or more precisely, electromagnetic radiation in the 15 μm wavelength band) emitter shines. This emitter needs around 3 minutes to heat up to a stable temperature. We can see this chamber when removing the top-most layer of the sensor. I had to do this with my Dremel 3000 and a cutting disc, because this sensor is glued shut and the glue didn’t melt at 300C from my hot air station. Some other parts of the sensor did start to melt, so I stopped at that temperature. 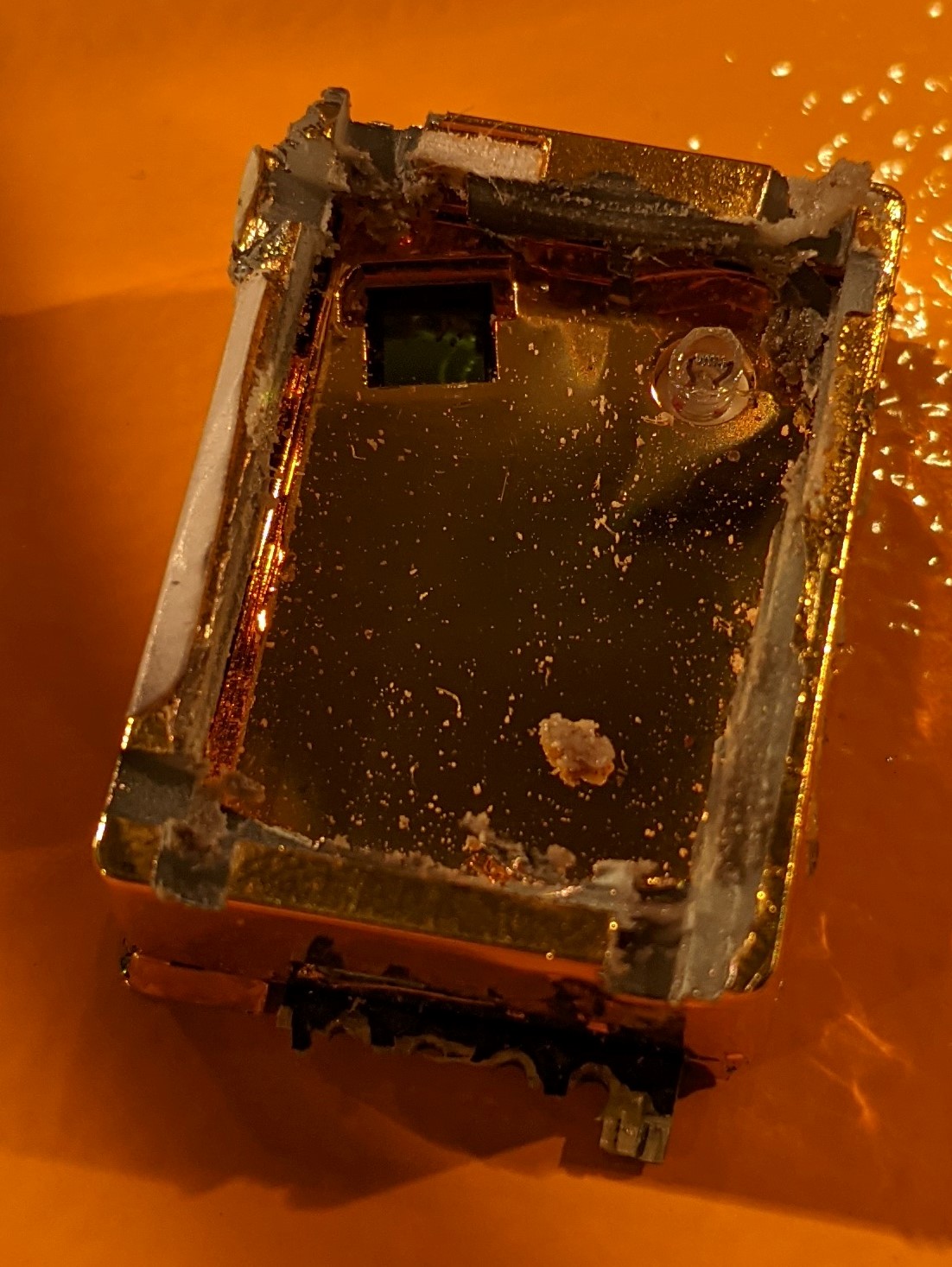 The MCU has the letters “F051K86”, “GQ2AI 1L9U”, “CHN 948B”. This indicates that it is an STM32F051K8 48 MHz ARM Cortex-M0 MCU. The sensor needs to measure its temperature, which may be influenced by the surrounding atmosphere, so one of these components is a thermistor. My guess would be it’s R4, which says “1 QRD” on it, since it’s the resistor closest to the diode. 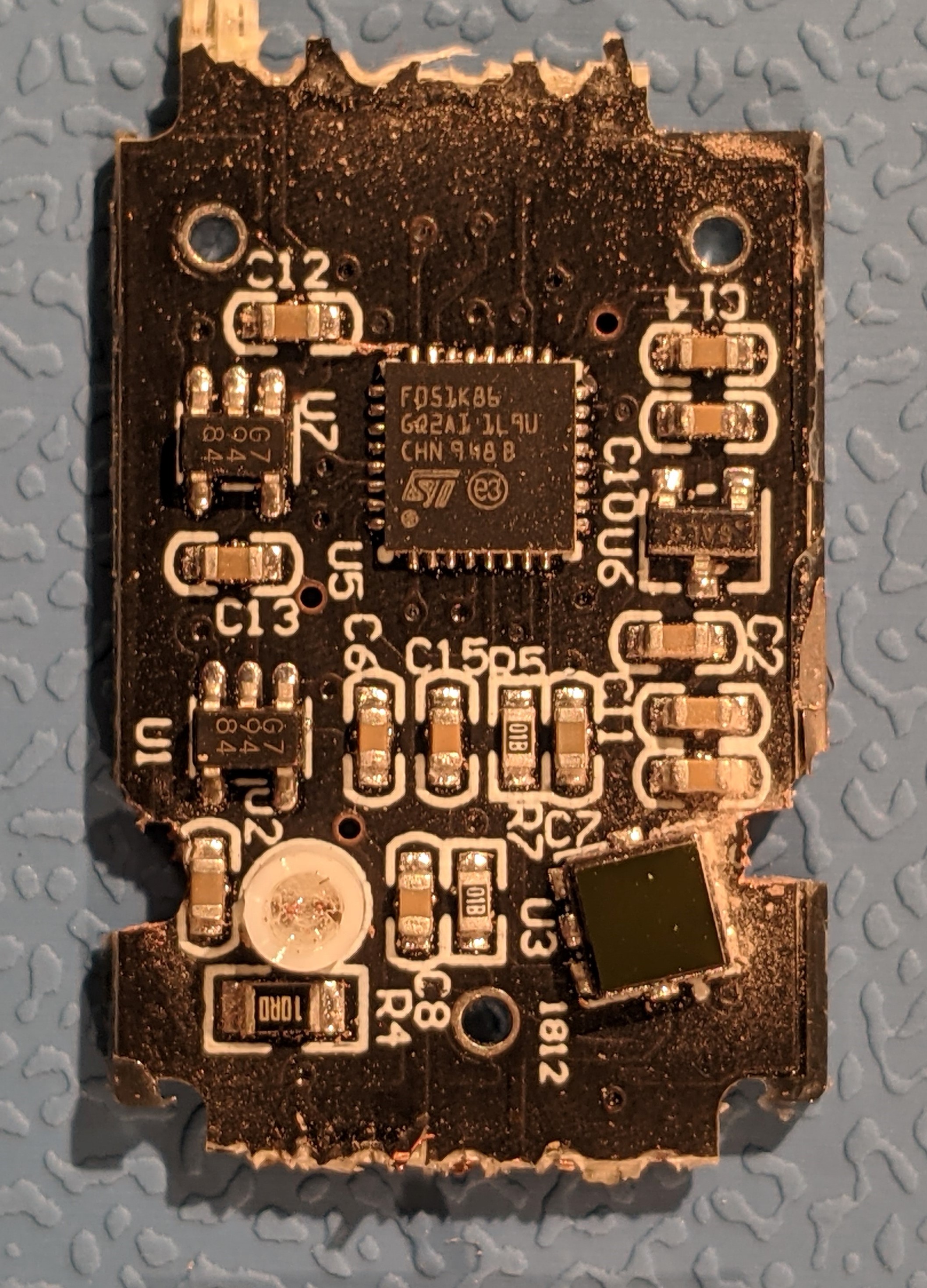 On the back, we see the Hd, Txd, Rdx, and V0 pins on the one side, and PWM, V- and V+ pins on the other side. The actual pins are gone because I tried to open up the box with a pair of pliars at first, which failed. Later I found out why that failed: the box is 1mm thick plastic and it took a decent amount of force on the Dremel to open it up. 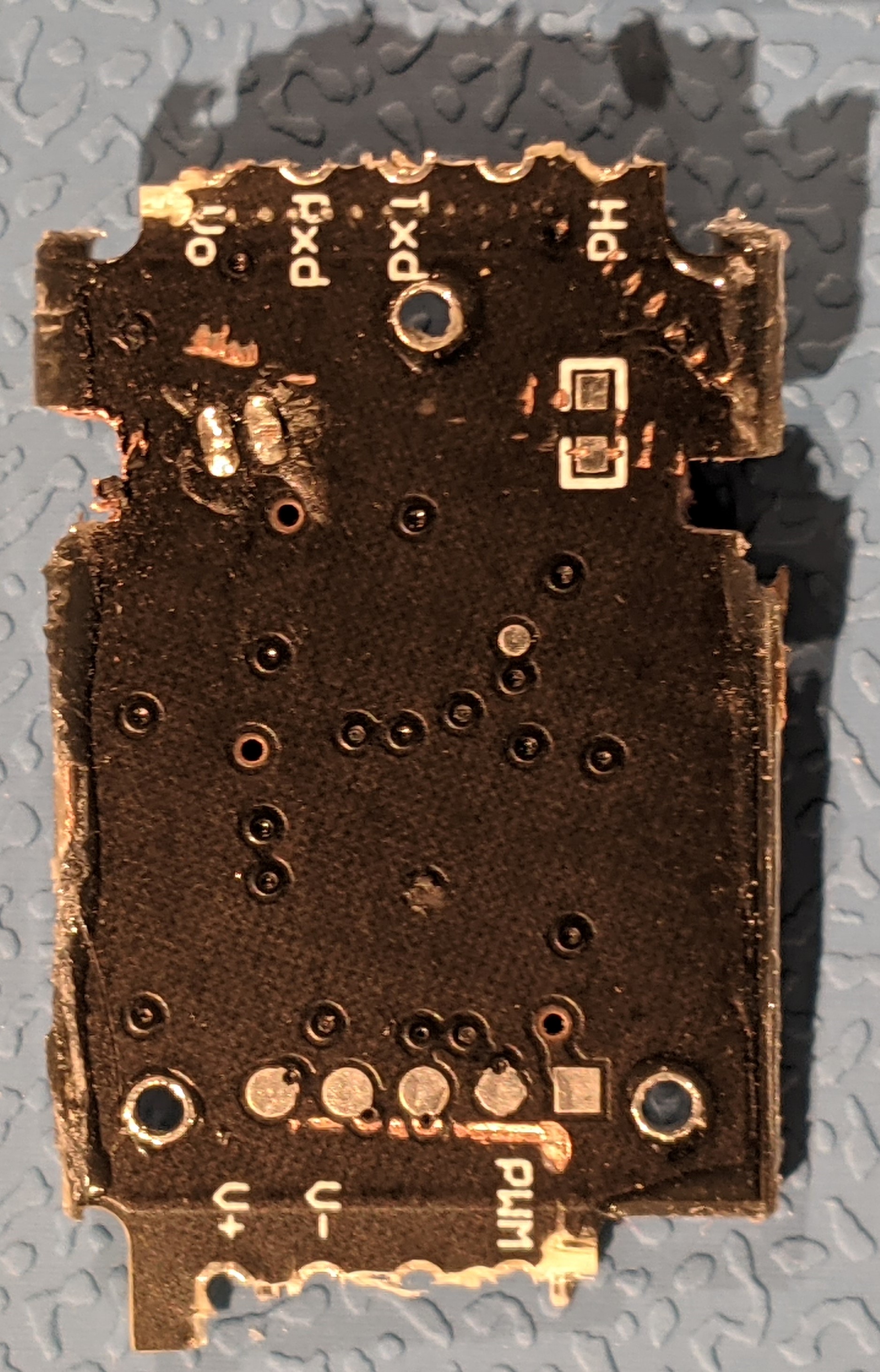 The MH-Z19B sensor can not easily be disassembled and reassembled. If you break it, it’s broken forever.

This is a PM0.3, PM0.5, PM2.5, and PM10 sensor. It works with laser scattering: a laser is aimed over a sensor, and small particles bend the light towards the sensor, which can then measure how many of those particles are in the atmosphere and how large they are based on the diameter of the ring shapes that appear on the sensor.

Unlike the MH-Z19B, this sensor can be disassembled and reassembled, so it can theoretically be repaired. In my case, both the fan and the laser were broken, so instead of trying to fix it, I bought a new one.

The sensor is shielded by an aluminium case which reduces influence on the measurement from electromagnetic radiation outside the sensor. 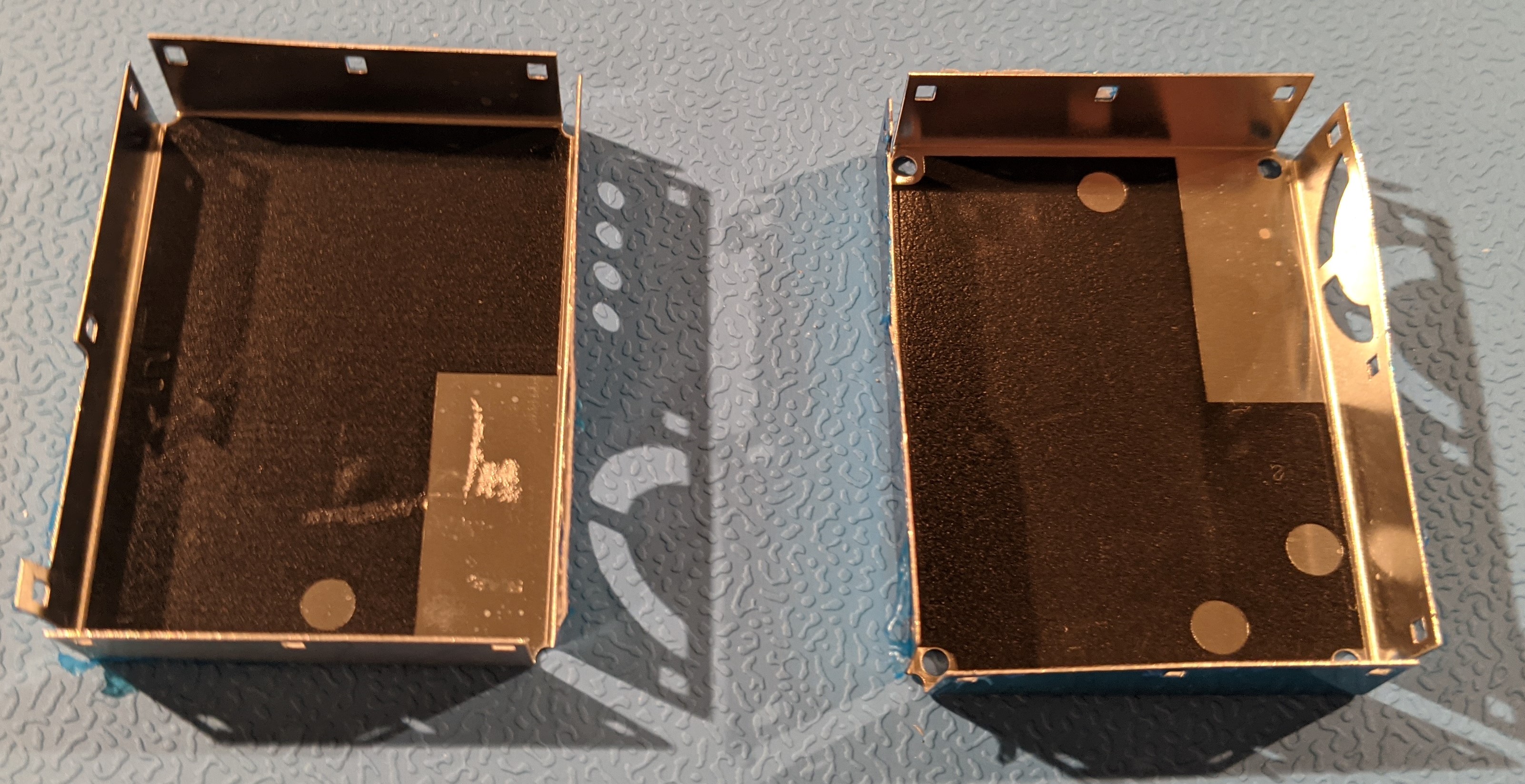 The laser itself is kept in a small plastic box (second item on the photo) to keep dust from getting onto the laser itself. The goal is to measure dust particles that flow through the case but not retain any of them, or even larger ones. A fan (4th item) blows air from outside the sensor through the case.

This is a close-up of the laser and sensor. The Molex socket provides power to the fan. 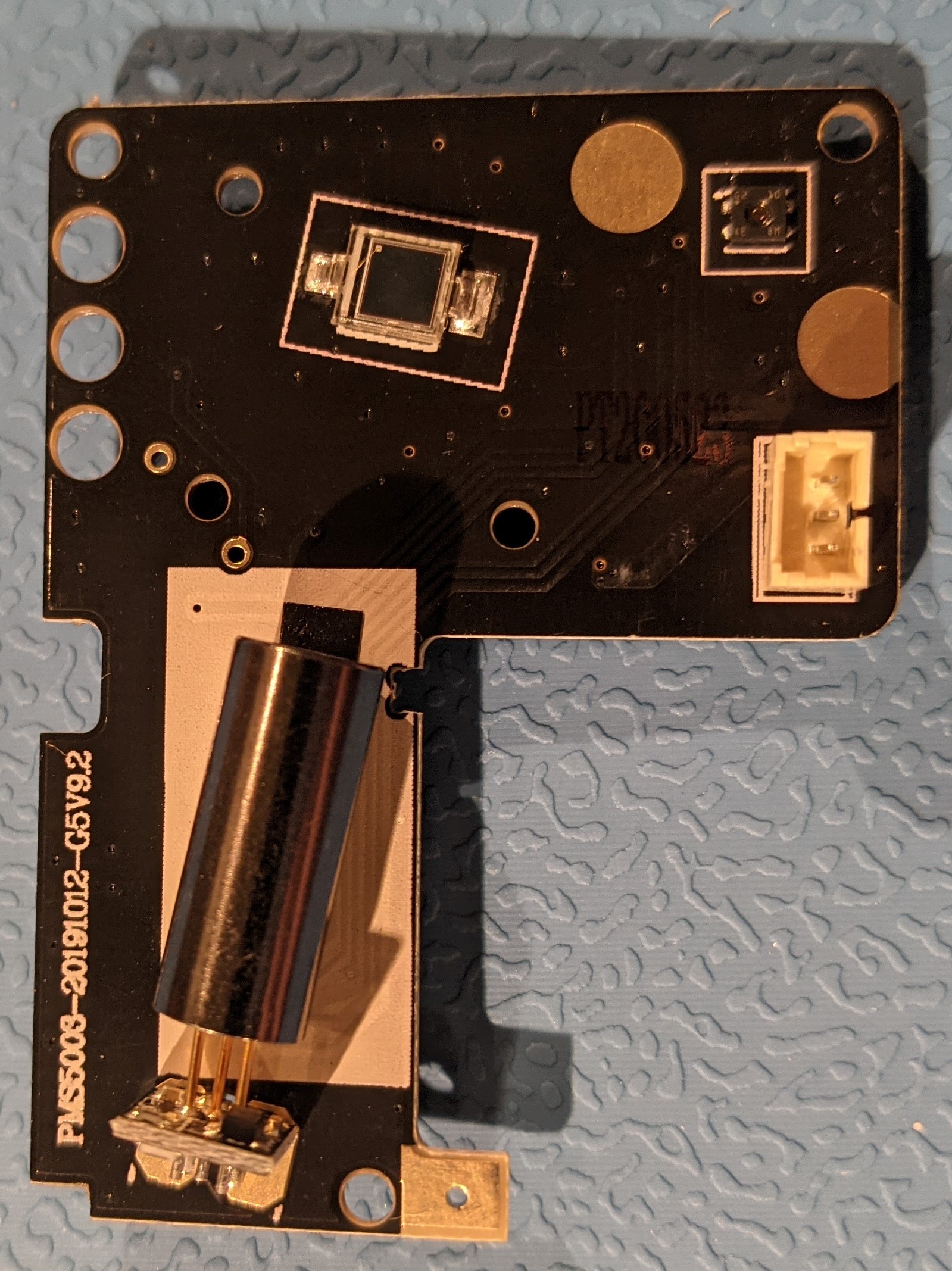 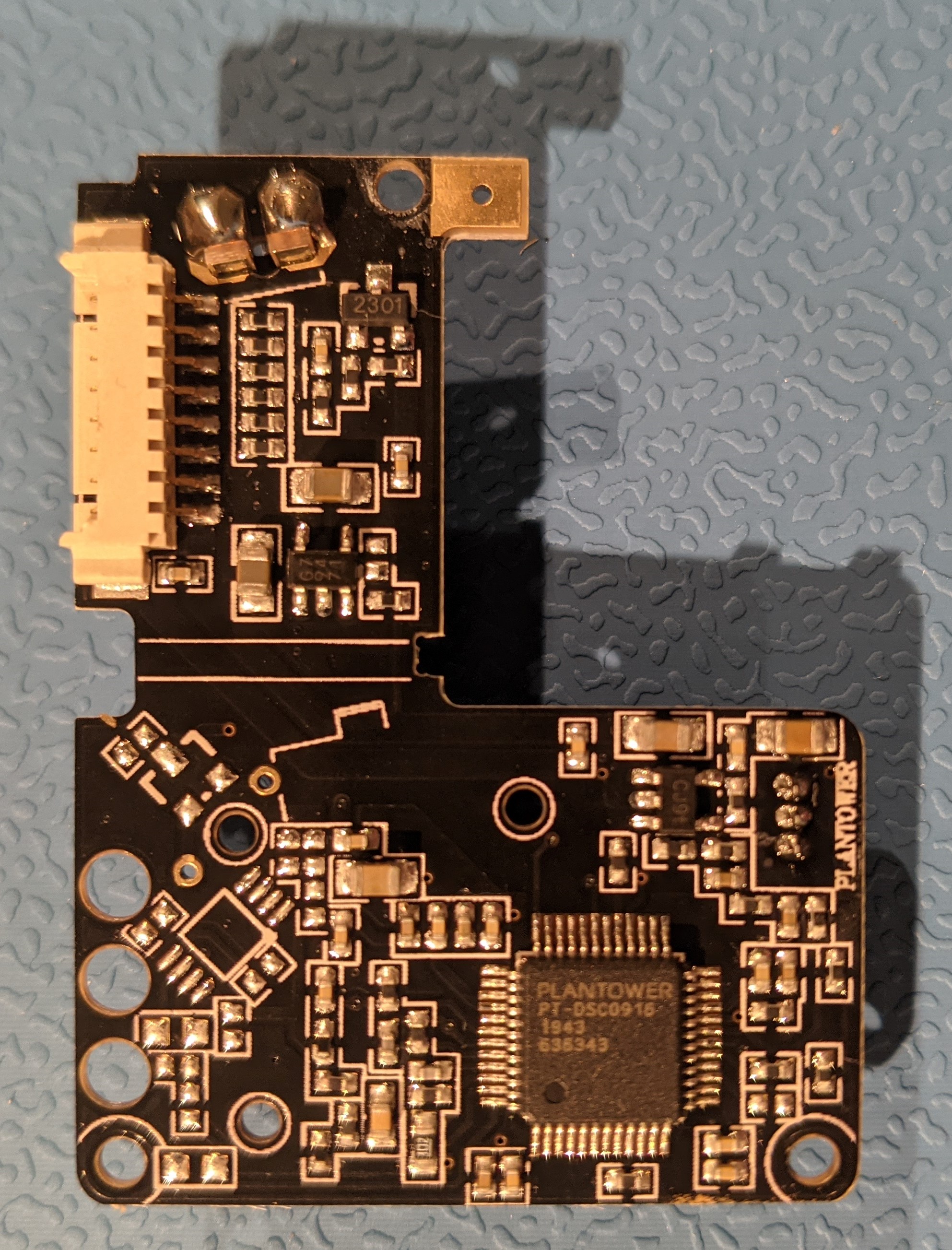 I’ve shaved off the top of the MCU and found something that looks like two separate pieces of silicon inside. If anyone has an idea what this is, do let me know. The MCU on this device was broken, so I couldn’t debug it to see what it might be. 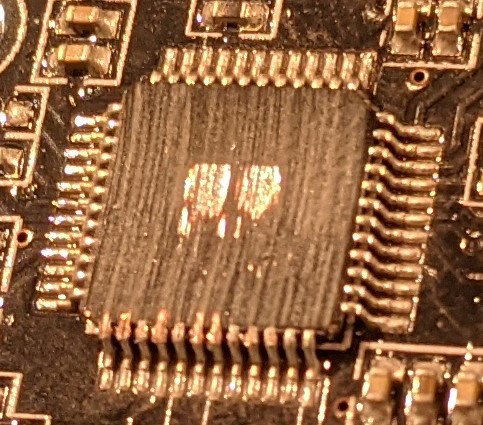